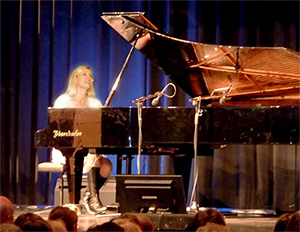 Isabelle von Fallois was born in Munich, Germany. She had her first piano lesson when she was eight years old. In 1986, she won prizes in various competitions.

Part of her training was with Hugo Seebach and Yasuko Matsuda. In 1989, she began her studies at the Academy of Music and Theater in Munich in Professor Michael Schäfer's piano class.

In the summer of 1990, a scholarship made it possible for her to spend three months working with Myrian Dauelsberg, piano teacher and goddaughter of Heitor Villa-Lobos, in Rio de Janeiro.

In 1991, she was awarded the City of Landsberg Rotary Club Kunstförderpreis.

Between 1991 and 1993, she developed song repertoire with singer Thomas Hampson. At the same time, she attended lessons with the legendary conductor, Maestro Sergiu Celibidache, in Munich from 1992 - 1996.

She also studied with pianist Arnaldo Cohen in London/Bloomington from 1991 - 1999.

In 1993, she could mainly be heard as an accompanist in Germany.

In 1994, she performed her debut as part of a benefit concert in the famous Herkulessaal in Munich. At the same time, she also collaborated on a project with the choreographer, Antonio Vargas.

Between 1995 and 1997, she performed piano and Lieder recitals in Germany and Italy.

In 1997, she was chosen to be a teacher in the piano department for an international summer course in Spain.

In 1998, she was invited to play at a gala by the UNESCO Special Ambassador, Ute Ohoven.

In Fall 1999, a mentor made it possible for her to dedicate several months at the beginning of 2000 to expanding her piano repertoire in Long Beach, California.

In April 2000, she played works from Chopin and Villa-Lobos at her last performance in Long Beach.

At the end of June, 2000, she learned that she had leukemia.

In 2001, she began anew together with the soprano, Susanna Wellenzohn, with the "Love Songs" program (works from Porter, Gershwin, Weill and Bernstein).

In 2002, she finally made her comeback as a soloist, which became a great success.

Between 2002 and 2004, she played piano and Lieder recitals, including a performance at the "7. Solinger Musiktagen für junge Interpreten" (Seventh Music Festival for Young Performers in Solingen), among others.

Starting in March 2004, she withdrew from the public eye after again taxing her health at a Lieder recital, so that she could finally recover from the prolonged effects of her illness.

In Fall 2006, she began to perform her program, "Music for the Soul," again and played at a seminar from Dr. Todd Ovokaitys in Salzburg, Austria, among others.

In addition to other concerts in 2007, she performed a recital at the Fortress of Marienberg in Würzburg, Germany, which was very meaningful for her (more about this topic can be found in her book "Die Erzengel").

Her performance on the grand piano in the Salzburg Convention Hall at the "Fifth International Angel Convention 2010" lead to great success and was rewarded with standing ovations.